Great news in Rockledge Florida! After a positive discussion on April 7, 2015, about allowing a tiny/small house community within city limits, the Rockledge Planning and Zoning Commission voted unanimously to forward the proposal on to City Council for approval.

Update 5/30/2015 – Tiny House Zoning to go before the Planning Commission on 6/2/2015
http://www.cityofrockledge.org/AgendaCenter/ViewFile/Agenda/330?html=true

Update 6/27/2015 – Rene has created a Facebook group for a Rockledge Tiny House Community. 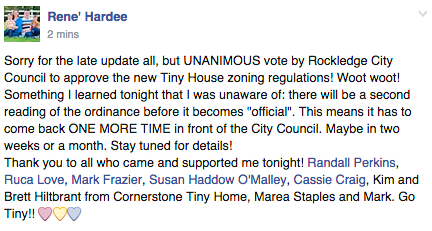